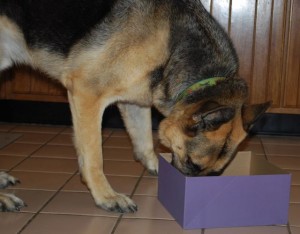 Last weekend I attended an official K9 Nose Work Introduction course. I was fortunate to be able to attend both days of the workshop and work each of my dogs, Chance and Emma. K9 Nose Work is a relatively new sport. It was first started in 2006 by three founders: Amy Herot, Ron Gaunt and Jill-Marie O’Brien (whom taught the course I attended). These three individuals wanted to create a fun new way to interact with their dogs and thus began K9 Nose Work.

K9 Nose Work (K9NW) taps into your dog’s natural ability and instinct to sniff things out and hunt. All dogs can participate in this activity and they really enjoy it. Dogs are constantly taking in scents and assessing their environment through those smells. K9NW hones in on this ability and turns it into a fun activity for both the dog and their handler.

An advantage to doing K9NW over some other activities is that any dog is welcome to participate, even dogs that are shy, fearful or somewhat reactive towards other dogs. In fact, behaviorally challenged dogs that participate in K9NW often times improve with their behaviors because they are given an outlet for their energy, they are mentally and physically challenged by the task, and for shy and/or fearful dogs, it helps build confidence in them. Dogs with disabilities are also welcome to participate. Many dogs doing K9NW are blind and/or deaf, but they can still smell and they figure out their environment based on that.

The object of the game is to get your dog to “hunt” down the box that is spiked with their favorite reinforcement, which could be high-valued food or a favorite toy. In the beginning, dogs are set up for success, by letting them see what’s in the box and get their reinforcer. Then the box is hidden in sight among other boxes and the dog is let loose to find it. As soon as the dog finds the correct box, they’re rewarded immediately with reinforcers inside the box, and then it’s followed up with additional reinforcers from the handler making it a “jack pot” find. As the dog understands the game and begins to hunt among the boxes, the handler has to be skilled in placing the spiked box amongst the decoy boxes. This can get tricky, so the handler has to become good at “fake outs”! Gradually after many drills in different locations, other containers can be added to the mix to increase the challenge, and eventually the dog can be transitioned into finding specific scents.

For teams that are looking to do K9NW competitively, there are K9NW trials and titles. As of now, there are three levels of competition where a team could be titled. Each level introduces a new scent. At the first level, dogs must be able to distinguish and detect Birch scent. At the second level, the scent is Anise, and at the third level, the scent is Clove. At each of these levels the dog needs to find the scent(s) in four different types of settings: container search, interior search, exterior search, and a vehicle search. It takes months of practice to get the point of competing for a trial. Many people don’t do it for the competition though, they just do it for fun!

K9NW is a great way to burn off energy in your dog, build confidence in them, and to also build a better bond between a handler and their dog. Handlers learn to really read their dog’s body language and ultimately trust their dog.

I’ll be putting into practice doing scent work with shelter dogs, since it is a great outlet for boredom and helps create a happier and healthier dog.

I’m looking forward to continuing doing scent games with my dogs and building our skills. Who knows if we’ll ever compete, that’s not my goal. My goal is to have fun with them, and ultimately that’s what it’s all about, right!

If you’re interested in having some fun with scent detection with your dog(s), let me know. 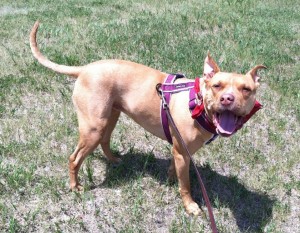