Last week at this time I was enrolled in Chicken Camp 101 with Terry Ryan of Legacy Canine. Terry first started teaching Chicken Camps 15-20 years ago when she wanted to offer dog trainers a way to hone their clicker training skills. Since chickens are often faster than dogs and less forgiving, they were an ideal species for trainers to work with to expand on their skill set and timing.

I attended the two-day workshop where I was paired with another person and assigned a chicken. My partner, Patricia Calderone of Clicker Canines, and I worked with a beautiful and talented hen named Chickira. Chickira is a cross between a Wheaten Ameracana and a Welsummer and produces olive-colored eggs (exterior shell).

Over the course of two days, we worked on our timing and delivery. Making sure not to be to distracting with our body language when working with the chicken and being sure to click the exact moment the behavior we wanted was being produced.

Chickens are quick, so this is where getting our timing down was crucial. I’m happy to say, both Patricia and I had pretty good timing, so we were able to increase the criteria for Chickira at a steady pace and she was able to achieve the approximations we set forth.

We worked on discrimination with Chickira. The first goal was to get her pecking at a target. The first approximation for this was simply to click any interest the chicken showed in the target, which for us, was Chickira bobbing her head towards the target.

[youtube id=”7iJOdT5guOk”]We were able to quickly get her pecking the target through a succession of approximations. Next we changed out the large, easy to distinguish black and white target for a smaller, more refined red-dot target.

Once she was reliably pecking the red-dot target, we started moving the target around on our work table, so that Chickira had to look for and move to peck the target. After she successfully figured out that game, we added another color: a blue-dot target of same shape and size, only different in color. If she happened to peck on the blue-dot target, she was not punished in any way, she was simply not clicked, thus given no reinforcement. This made it clear to Chickira that if she wanted a click and reinforcement, she needed to peck the red-dot target, and red only. Again, we proofed her by moving the targets around, putting them close to each other, sometimes even overlapping them slightly, but only clicking and reinforcing when Chickira got the correct color.

She was a smart chicken though and stepped…err pecked up to the challenge. That’s when we really tested her discrimination skills and added a third color: a yellow-dot. At this level, Chickira faulted a few times, but after some extinction training, she quickly got it. For extinction to work in this exercise, we withdrew the red dot when she incorrectly pecked a different color, only leaving her with the blue and yellow. If she pecked at either of them, she would get nothing. After a few attempts of this, she would give up pecking the “wrong” dots, then we quickly presented her with the red-dot target again. When she pecked it, she got the click and reinforcer, thus strengthening her understanding that red-dot target means good things. For this extinction training to work though, the previous rate of reinforcement had to be fairly high in order for there to be a strong impact. In our case, we were clicking Chickira roughly 11 times within a 30 second frame. By the end, she was actively seeking out the red-dot; and when the red-dot was removed, she would search for it, but not peck the other colors since that was a waste of her energy and yielded her nothing.
I throughly enjoyed my two days of working with Terry, Patricia, my friends Pam and Lisa, and all the wonderful people at the workshop. I’m thankful for Narnia Pet Behavior and Training Center for hosting such a wonderful woman and presenter, Terry Ryan. She truly is a gifted person, not only in her “clicking” talent but in her ability to teach others in a learner-based manner. 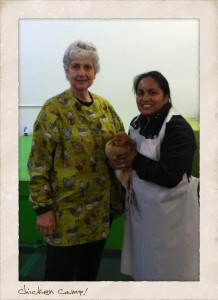 I am all signed up for Chicken Camp 201 this September.

All the chickens who attended Chicken Camp are owned by the same person, Pat, and live a wonderful life on her farm as laying hens. Pat welcomed all of us “Campers” to come out to her farm and work with her chickens whenever we wanted. If only I lived closer to her!