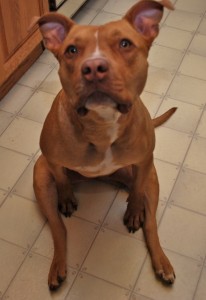 This post is two-fold, the first part discussing how feeding people food to your dog won’t teach him to beg, unless you’re reinforcing a begging behavior. The second part is teaching a begging dog not to beg: Zen Dog Training–If you want something, act like you don’t want it!

I hear it often during the first week of dog training classes or the first time meeting a client during a one-on-one session, “I don’t want to reward my dog with people food because I don’t want my dog to start begging.”

Dogs learn within context, and continue to do things that are reinforcing to them. Meaning if I feed my dog or give him attention while he’s begging, than yes, I’ll teach him to beg rather quickly. This is why having young children and dogs together can create a begging dog in no time flat, since kids often drop food either intentionally or unintentionally and the dog quickly learns that hanging out by the kids yields them lots of yummy morsels.

Let’s examine the people food controversy for a moment. What do you think your dog’s food is made out of? When you look at the ingredient list, if it’s a high-quality food, you’ll see a protein source: chicken, duck, lamb, or beef as the first ingredient; followed by a carbohydrate of some sort: rice, potatoes, peas, or quinoa, and the list goes on. So when we feed our dogs pieces of chicken, hotdog, cheese, etc…, we’re really just giving them the core ingredients of what they’re already receiving in their daily diet. Some would argue it’s a better way to feed our dogs–less or no fillers, or preservatives. Feeding the core ingredients is likely higher-value than their regular kibble or dry biscuits though, so you will generate more interest from your dog when using people food.

How do you prevent your dog from begging?

Tonight I practiced the Zen Doggie Game with my dog, Emma. I had a bowl of popcorn-a favorite snack for both me and the dogs-Emma was sitting next to me and staring. So I started the Zen Dog Training with her. If she was going to get any popcorn from me, she needed to act like she didn’t want it.

This is how you can teach a dog not to beg. Simply reinforce the behaviors you like, and ignore the behaviors you don’t want. If you don’t want your dog staring at you, then don’t give him food or attention when he’s doing so. Either ignore the begging behavior, or cue him to do something else instead and reinforce that behavior when it happens. You can feed your dog from your plate by marking when he gives you non-begging behaviors, and then toss the food away from where you’re sitting.

Ta-da! Give it a try, and let me know how your dog did!