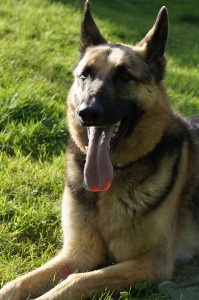 “He knows what I’m telling him, he just chooses not to do it.” I beg to differ, if your dog is not doing what is asked, there is probably a reasonable explanation for it. Such as, he doesn’t know what you’re asking of him, or it hasn’t been strongly reinforced enough in the past that the dog understands that it’s the best option, or you’ve given him mixed signals and haven’t made it clear to him what is being expected of him.

Dogs do not misbehave to be stubborn or spiteful; they often don’t comply because they either do not understand what is being of asked of them, the reinforcement isn’t high enough, or something else is going on to cause them not to comply.  Here are some questions to ask when your dog doesn’t listen:

How is he feeling?

Be sure your dog is healthy. One of the first signs your dog isn’t feeling well is that he won’t be his “normal” self, and may not listen to cues that in the past were never an issue.

Are you asking for behaviors in a new environment? Are there other dogs in the area? Are there unfamiliar people near by?

When a dog feels unsafe or uncomfortable, they tend to be more concerned about their safety and well-being than complying to what’s being asked of them. By adding distance between your dog and potentially scary things in his environment, you’ll increase your dog’s ability to perform the tasks that are being asked of him.

Decrease the level of difficulty of the task you’re asking of your dog until he feels more comfortable. Create positive associations in new environments, by pairing the experience with high-value reinforcements and asking achievable, simple tasks.

Does he REALLY understand what you’re asking?

Maybe you think he knows, but he actually doesn’t. Be sure as you’re teaching new behaviors, or increasing the criteria of existing behaviors, that it’s being done in small steps. People often lump big steps together, rather than breaking them down into small parts. Be sure to master one level before going onto the next. Use what is reinforcing to your DOG when teaching behaviors so that your dog is more likely to offer those behaviors in the future.

Example: You may enjoy petting your dog, but your dog may not actually care too much for it. Is petting your dog going to be a strong enough reinforcement for him to want to repeat that behavior he was petted for in the future, or would a piece of chicken or cheese, or a toss of his favorite ball be more rewarding for him?

They Don’t Come Out of the Womb Knowing Cues:

I know it sounds silly, but you’d be amazed at the number of people who assume dogs just “come” knowing sit and other behaviors to our language. Remember, dogs do not speak our language naturally, they need to be guided and taught our language and what the meaning is behind each cue. It’s important to be proactive and teach what you’d like from your dog versus correcting and saying “No” to all the incorrect behaviors.

Imagine if you went to work at a new job and no one told you or showed you what you needed to do. Instead all your co-workers would do is tell you, “No, you’re doing it wrong”, every time you started to do something. You weren’t given any other feedback. How frustrating! Pretty soon you may not want to even attempt to try anything for fear of being told “No” again. This is what life is like for so many dogs living with people.

Example: A dog likes to greet people by jumping up on them (a natural behavior). The owner constantly yells “No” at the dog, he pushes the dog away and may even knee the dog. The dog isn’t given any other feedback, so not knowing any other way and at least receiving some form of attention from his person, he continues to jump in the future despite what his owner does to him.

Now imagine that the owner teaches the dog to sit on cue through luring or shaping,  gives a cookie or nice verbal praise and pet every time the dog sits, and then ignores the dog completely for jumping. Quickly the dog will learn that sitting yields good results and jumping yields nothing!

By changing the feedback and teaching an alternative behavior, the dog and person are both happy in the end.