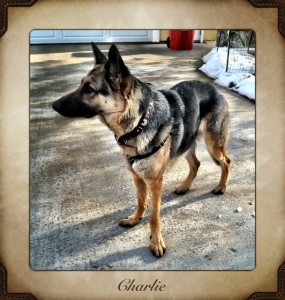 Some things happen for a reason. It may just be coincidence, maybe serendipitous or as I’d like to believe, magical. Whether you believe in any of this or not, here’s a little story I’d like to share.

At the beginning of January, a stray German Shepherd was brought into the Winona Area Humane Society. He was tall, lanky and underweight. He reminded me so much of my Shepherd, Chance, when I first adopted him. As I do with all incoming dogs, I scanned him for a microchip, which he had, but I couldn’t find a registry for it. I then assessed him using the ASPCA’s SAFER assessment. He scored fine on the assessment items, but I could tell from his body language he was a bit fearful during some areas of it. I made a note of these behaviors and carried on with my business of the day, but I kept thinking of him. I was struck by how much he resembled Chance, not only in color, but in his personality. I could see the potential this dog had and I was hoping his owners, if they ever came forward, saw it too.

The next day I was in Rochester with Chance for a dog agility class. Before class we were walking around Rochester Feed and Country Store, which is below the training room we attend. The store was having an event that night so there were quite a few people inside. As we walked around we had a nice couple walk up to us and ask about Chance. They commented on Chance’s beauty and personality. As we talked I learned that the woman had Shepherds in the past and has always loved the breed. They expressed interest in possibly adopting a Shepherd in the future. I shared with them that I had adopted Chance as a ten month old puppy from Mississippi Valley German Shepherd Dog Rescue and that I still help out with the group when I can. Then I told them about the German Shepherd that had just arrived at WAHS. I explained that he was still in his reclaim period so there was a chance his owners would come forward and take him home. I gave them my business card and told them if they were interested in adopting a dog in the future I’d be happy to help them search for one.

The following day, the City of Winona’s Animal Control officer scanned the chip with her machine and was able to trace down where the chip was registered to. It turns out the dog’s name is Charlie and he had been re-homed three times since being chipped. We were finally able to contact his current owner, who came the following day to reclaim him. When Charlie’s owner arrived to pick him up, the man did not seem at all excited to get his dog back. Charlie was excited to see him, but the feeling wasn’t reciprocated. I know if my dog is missing, even for a half an hour, I’m very happy to have them home. So the fact that Charlie’s person seemed to care less bothered me.

Again, I kept thinking of Charlie and finally after two days, decided to call the man and ask how things were going with Charlie. No answer, so I left a message letting him know I’d be happy to offer training sessions for Charlie and him, to build their bond and train Charlie to be the dog he had the potential of being. In the end I also told him that if he ever wanted to surrender Charlie, I’d take him.That was that. I didn’t hear anything from anyone. Charlie would still cross my mind, but there was nothing more I could do.

Then on Valentine’s day morning I checked my email and found one sent from the woman whom I had met at the Rochester Feed store. She asked if I had remembered her and then said she couldn’t stop thinking about the German Shepherd that had been brought into the humane society. She wondered what happened to him and if he was available for adoption. As I was about to reply back to her letting her know that Charlie had been reclaimed, my phone rang. A co-worker from the humane society told me there was a young man wanting to surrender his GSD and he told her I had called him in the past. I knew right away it had to be Charlie! I told my co-worker to go ahead and take him. That I’d actually take Charlie into my rescue group, MN Pit Stop. I could not believe my luck…Charlie’s luck, so I emailed the woman back explaining what had just happened. She responded back immediately saying she had tears in her eyes and that she was very much interested in adopting Charlie. I needed to find out how he was with other dogs, kids and cats, since she had grandchildren that visited often. So I picked Charlie up and brought him home. Over the next several days, I put him through the gauntlet. I introduced him children, cats, other dogs and a lot of people. We walked around town, into businesses and took a ride through the car wash. Charlie handled everything in stride and didn’t show any behaviors that concerned me.

I made arrangements with the couple to come to my home and visit Charlie. True to the breed, Charlie bonded quickly with me, so he was a bit aloof to them when they arrived, but I assured them, all it would take is a few days and he’d be just as bonded to them. They decided to do a two-week trail adoption period with him, so a day later I delivered Charlie to their home. That was two weeks ago today. They are in love with Charlie and Charlie is happy to be a part of their family.