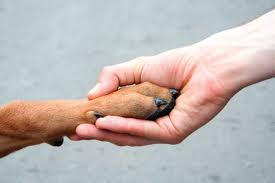 Yesterday was a gloomy day for me, not just because of the gray, cold, fog-ridden weather outside, but because I was witness to two dogs being humanely euthanized. The first a young, very well-loved dog that was having exploratory surgery after a mass in his abdomen had been discovered. Upon opening him up, it was determined that the tumor was to massive and connected to too much to be removed. His owner opted to have him euthanized after weighing all the options and ultimately wanting him to go before his spirit was taken by illness. This handsome dog was only two years old and lived a rich and happy life. His owner is broken up and in despair for she lost her best friend yesterday.

If that wasn’t heavy enough, I then did a compassion hold for a dog who’s behaviors yielded her unadoptable. These decisions are never made lightly and are always excruciating for me.

With a heavy heart, I played one last round of fetch with her, provided her with a tasty meal and held her as she passed out of this world.

Many people ask what compassion holds are and why I do them. Compassion holds are just as they sound, it’s being there for another living being as they die. Showing that animal a gentle touch and love even when it seems the rest of world has given up on them.

Many animals that enter shelters come in as strays, their past unknown. In some cases, it seems obvious that the animal lived a hard life prior to arriving the shelter. They may not have known what a good meal was, what a gentle touch was or that people can be loving and caring.

In my profession, I always try to rehabilitate dogs to where they are adoptable, but there are some I can’t reach. Some that are to far damaged from previous experiences or faulty genetics and I can’t risk rehoming them where they may injure others or themselves.

Again, I never make these decisions lightly. So when the decision is made, the least I can do is be there for this creature who was brought into this world because of humans, who had the cards stacked against them from the start and where this is not their fault. This lovely creature deserves to feel compassion, even if it’s for the first time in their life.

Please go hug your family members (this means furry and feathered too), show them love and compassion, and treasure the time you have with them.

One Reply to “Heavy Heart”