It’s time to jump on the bandwagon and start my own blog. This blog will detail some of happenings in my life as I share it with my own companion animals, client’s companions and friends & family.

On Friday, I brought home a foster puppy. She is very tiny, only two pounds, and is around five weeks of age. Someone found her on the side of a back country road in Iowa with no other animals or houses within sight. The name given to her at the humane society is Bindi, but I’ve just been calling her “puppy” and “little one”. It’s been an adventure thus far with her. The other animals in the house have adjusted to her presence quickly. The most comical relationship that’s formed has been between, Steve, our new addition to the family, the ten pound Siamese and the puppy. Steve follows the puppy around and often engages in play with her. He’s very gentle with her and if the puppy gets to be to much for him, he simply gets up and walks away. 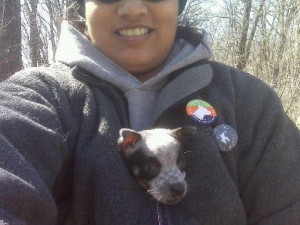 Having a five week old puppy in the house certainly gives me an appreciation for what some of my clients go through when they first bring their new puppy home. It’s a good refresher for having patience and empathy for others who’ve traveled down this path. We’re not certain what the puppy’s genetic make-up is, she looks like a miniaturized version of an Australian Cattle Dog, but she’s way to tiny to be one. So the next guess would be a Rat Terrier, Chihuahua mix possibly? Genetic testing would be the only way to find out for certain what breeds she contains in her lineage. No matter, she’s pretty darn adorable and I don’t think I have to worry about finding her a new home. I should probably be more concerned about fending people off her once they view the cute videos I’ve taken of her!

2 Replies to “An unexpected foster puppy”