In honor of Adopt-a-Shelter-Cat Month, I thought I’d share Yeti, Jezebel and Steve’s stories. All three of our cats were rescue cats. Yeti and Jezebel are litter-mates that were born to a semi-feral mother six years ago. Since I did not want to see the kittens become feral and add to the overwhelming number of homeless, breeding cats, I decided to take in mom-cat and her litter. It was love at first sight when I saw Jezebel, she was the only black kitten of the bunch and all she needed to do was look up at me and give a little “mew”, I was a goner! It was decided on the first day that we would keep Jezebel and that we’d find homes for the rest of the kittens and mom. During their time with us though, we fell in love with Yeti too (named after the white, snow-country big foots…Yetis). He was the only male kitten and the only one with long hair. His forehead seemed abnormally large, but he eventually grew into it! Mom cat went to the humane society after her kittens were weaned and was adopted shortly after arriving to the shelter. I screened potential adopters for the kittens and found homes for the rest of the litter. 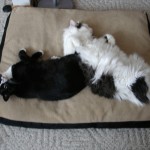 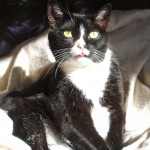 Both Yeti and Jezebel are extremely loving cats. They are more dog-like than cat-like, maybe that has to do with the fact they were raised around my last German Shepherd, Indy, and my mother’s dog, Delilah. I have done a small amount of clicker training with Yeti. He knows Sit, Down, Target,  sit Pretty (begging position-upright on back feet) and Come. Our cats are indoor cats since I feel strongly that domestic house cats should live indoors for a variety of reasons. I will however let my cats venture outside while under supervision. Yeti and Jezebel can be trusted to be outdoors with me without a leash on. They come when called and don’t travel to far from me. Steve on the other hand is a different story! 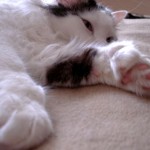 Steve arrived into our home this past November. He was brought into the shelter very emaciated and we were all concerned he wouldn’t make it through it the night. Fortunately, he did and once he was feeling better, he was happy to let people know about it by greeting them with a Siamese Yeowlll. Since he seemed unhappy at the humane society, I brought him home to foster him and get him healthy again. This is how he failed as a foster and become a permanent addition to our household. Shortly after bringing Steve home, Brett and I watched the movie Cloudy With a Chance of Meatballs and loved it. For those of you who haven’t seen it, the monkey in the movie is named Steve. Brett thought it was a great name for a cat. I wasn’t on board at first, but he’s actually grown into the name! 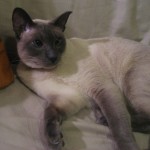 Steve fit in our home from day one. Emma, our Pit Bull, became his guardian right from the start and looked over him while he gained strength and put on much needed weight. As Steve started to feel better he started to engage in play with Yeti. This proved to be great for Yeti since he and his sister had grown apart over recent years and he really seemed to enjoy having a playmate again. Jezebel was not so thrilled with the new arrival and showed her disgust by not talking or interacting with me for several days while at the same time hissing at Steve whenever she had the chance. Over time though, all the cats grew to co-exist with one another and can now all be caught sleeping on the same bed together and eating in close proximity.

There are thousands of cats that need homes. Many are sweet, cuddly and just want to be loved by a family of their own. For anyone considering getting a cat, I strongly urge them to check out their local shelter or humane society. It is often times much less expensive to adopt cat than it is to get a cat for free from an advertisement, since “free” cats rarely come vaccinated and neutered/spayed. Most facilities alter cats before they leave their place and make sure they are up-to-date on vaccinations. These fees alone cost the average person several hundred dollars or more, where at most facilities the adoption fee for cats one year old or older is $100 or less. In some places, such as the WI Humane Society, adult cats are available at no cost.